The Tommy Tant Memorial Surf Classic celebrates the life of Flagler Beach local surf standout, Tommy Tant, who passed away in 1998 from an aortic aneurysm. Hundreds of surfers compete in pro, open, and amateur divisions, attracting thousands of spectators from across the East Coast.

The Tommy Tant Memorial Surf Classic began fifteen years ago as a small event to celebrate the life of 24-year old surfer, Tommy Tant, who died unexpectedly in his sleep from an aortic aneurysm. With the help of Tommy’s former high school teachers, the Flagler Palm Coast High School marketing class organized the first contest. Proceeds were given away in scholarships to local students, beginning the Tommy Tant Memorial Scholarship Fund.

After the original event, Zoee Forehand, owner of Z-wave Surf Shop in Flagler Beach, and her staff directed the contest for the next three years.  In the fifth year, Tommy’s younger brother, Will, became the event organizer. Now a professional surfer, Will wanted to inspire and encourage the local youth to follow their dreams by introducing them to professional athletes and artists.

“After everything that happened with Tommy, the Tants could have sealed themselves off in the house and been recluses. But instead, they turned that pain into healing, and the Tommy Tant Memorial Surf Classic has become the biggest day of the year in Flagler.” –Matt Katsolis, friend, videographer, and Flagler Beach native 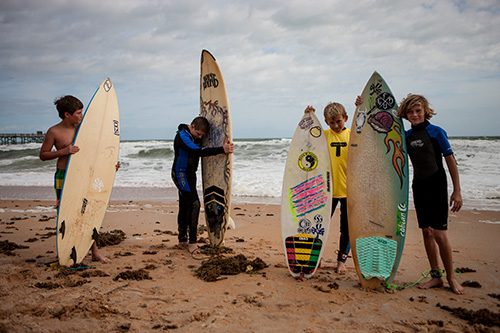 With the help of the surf community, the Tommy Tant Memorial Surf Classic is now a internationally recognized event. The event has featured world-renowned photographers Aaron Chang, Brian Nevins, Jimmy Wilson and Tony Neste, cinematographers Matt Katsolis and Nic McClean, artists Austin Blasingame and Patrick Maxcy, and musicians Braddigan and Josh Garrels. Each year, the event also features pro-surfers from across the country, including past champions Aaron Cormican, Asher Nolan and Jesse Heilman.

Over the past twenty years, the Tommy Tant has grown into a two-day event with more than 300 contestants. This year the 20th Annual Tommy Tant Surf Classic will include two days of amateur and professional competition and other events to be announced. All proceeds benefit the Tommy Tant Memorial Scholarship Fund, the Flagler County Food Bank, and the National Marfan Foundation.

“It may sound corny, but I’d say the vibe is something along the lines of love or heart or community. It just draws such a cool crowd. It’s something special. It’s something that people look forward to and plan their vacation days around so that they can come into town for it.” –Jesse Heilman, friend and fellow North Florida pro

The Tommy Tant Memorial Surf Classic celebrates the life of Flagler Beach, Florida local surf standout, Tommy Tant, who passed away in 1998 from an aortic aneurysm. Hundreds of surfers compete in professional, open, and amateur divisions, attracting thousands of spectators from across the East Coast. More »